Download the map to see how to reach our Farmhouse

We are in Torre Alfina

The old village of Torre Alfina is dominated by the majestic neomedieval castle and is located nearby Orvieto and the Bolsena Lake in the north of Lazio, on the border of Umbria and Tuscany.

Because of its position, 600 AMSL, surrounded by evocative and pristine landscape, Torre Alfina offers quiet and clean air. The village is part of the Club “ I Borghi piu belli d`Italia” and counts above 400 people, the houses enclose the castle, setting up a semicircle. You can admire artwork from local artists as you walk through the streets. An absolute highlight is the fairy tale like forest, called Sasseto, which has intricate paths to walk through.

Torre Alfina is famous for its hospitality, good cooking, excellent handmade ice cream and local specialties such as prime meat and bread.

In the summertime there is a Blues Festival and a Boar fest. 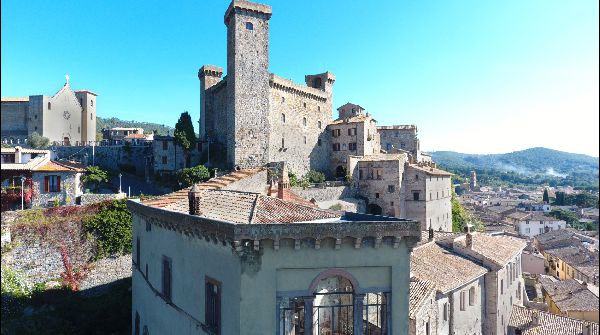 The Lago di Bolsena, situated between Florence and Rome, is one of the largest crater lakes in Europe (114km). With its clear, clean water the lake is ideal for swimming, sailing and surfing. The breathtaking countryside, friendliness of the people, and many - seemingly unchanged - ancient villages, make this a most interesting and enjoyable holiday destination! 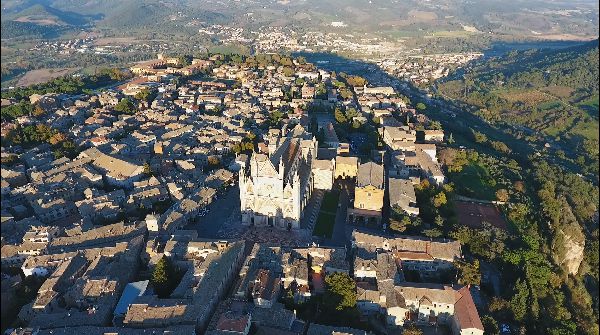 The ancient city was founded by the Etruscan, which witness the necropolis nearby and has his splendor time in medieval era with constructions of fortifications, palaces, towers and churches.
The town stays to a high cliff of tuff and rises from the Tiber valley, making it one of rare beauty.
The heart of Orvieto is the cathedral, one of the greatest artistic achievements of the late middle ages, a masterpiece of gothic architecture. 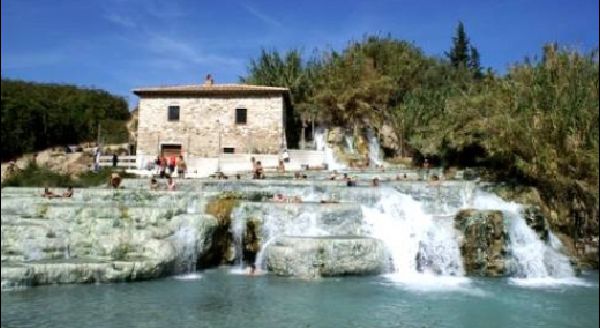 The area of Saturnia Spa presents, as a whole, a large and freely accessible area where it has developed the famed luxury spa of Terme di Saturnia, where, in addition to various thermal treatments, also produces thermal perfumes and creams for men and women.
The sulphurous spring water, at a temperature of 37.5 °C (99 °F), are well known for their therapeutic properties, offering relaxation and well being through immersion.
The yield of the source is about 800 liters per second, which guarantees an optimal replacement of water. The chemical make-up is sulfur, carbon, sulfate, bicarbonate-alkaline, earth, with the presence of hydrogen sulfide gas and carbon dioxide. The minerals dissolved in water amount to 2.79 grams per liter. The springs were already known at the time of the Etruscans who had identified the virtues source “miracolous”. 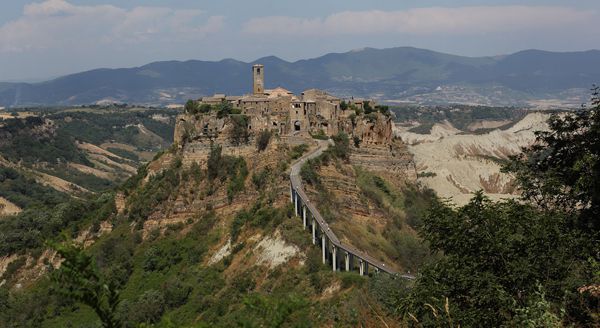 Civita di Bagnoregio is also known as the “dying town”. Perched on a tuffaceous hill in the middle of a landslide-prone valley, this nice little town is slowly succumbing to the ravages of time. It was once a thriving town, built by the Etruscan to protect a road leading from Lake Bolsena to the north across the Tiber valley.
Today, the visitors’ footsteps ring out in the small streets, alleys and little piazzas of a town, and its nice nooks and crannies are bathed in an almost religious silence. From Civita, you can take a wonderful view over the lunar landscape created by the Calanchi (big clay formations rising all around Civita).

Other attractions in the surrounding area include:

• The “Sassetto”, a wonderful forest at Torre Alfina

• Civita di Bagnoregio (a romantic ancient village on a cliff, reachable only on foot via a bridge)

• The ancient Etruscan Graves and the Museum in Tarquinia

• A boat-trip to the Bisentina Island on the Bolsena lake, (once the Summer residence of the Pope)

Of a particularly nice attraction are also the hot Springs found in the area, for instance those at Saturnia, or going for a swim in the Mediterranean Sea - a 1 hour drive away. The area offers an abundance of joy for all nature lovers, including hikers, bike riders and those who enjoy various water sports.

Thanks for filling out form!